WHAT DOES THE IRDO INSTITUTE DO?

You are invited to participate – become our member!

Providers: Experts and practitioners of the IRDO institute and its members, i.e. external associates for a given field.
Price and scope: by agreement. We customize the offer depending on the request, needs and possibilities of the client.
Appointments: by agreement.
Contact and orders: info@irdo.si, +386(0)31 344 883

Consultation for companies and organisations

We carry out expert consultation for companies and organisations and organise the execution of socially responsible, marketing and development activities. We consult companies on areas of developing SR strategies, new products and marketing services in the context of SR. We show options of introducing social responsibility in business activities and present examples of good practice, especially through the Horus award. The funds that the IRDO institute gets from the organisations are used for non-profit activities and further development of the IRDO institute.

More and more companies, foundations and organisations come across the need to know more about social responsibility. For this purpose, the experts of the IRDO institute are working on seminars and workshops on request.

The educational contents are prepared by the wishes, needs and possibilities of the clients.

The participants usually familiarise themselves about the basic concept of social responsibility, fields, advantages and weaknesses, standards, examples of business practice, news and concrete instructions on work in the client’s company, organisation or foundation. With the help of the participants, we design a program of development and depending on the possibilities and needs of the client, help realise it in practice.

By request of the clients, we can also prepare specialized programs of training for different branches (internal, external programs). Send us your requests, wishes or needs at info@irdo.si. We look forward to working with you.

We are educating CEO’s and Department managers, experts, who can gain our certificate Manager for Social Responsibility and Sustainable Development. If you are interested, please contact us!

The mission of the HORUS award is to promote holism in thinking, innovation in working and responsibility in conducting Slovenian companies’, organisations’ and individuals’ activities. With the HORUS award we wish to strengthen the awareness of the meaning of social responsibility and warn on humans’ interdependence. Since 2009 we publish a call each year for various categories, we promote examples of good practice of Slovenian companies, organisations and individuals through seminars and publications in media, and through consultation in preparing SR strategies we encourage them to a more responsible and effective business activity. The archive of awarded companies and organisations has already grown into a library of examples of good practice in areas of social responsibility and is an invaluable source of skills and knowledge in the field. We bestow the HORUS award in collaboration with the Slovenian association for public relations (PRSS) and many support partners. More at: www.horus.si

We carried out an expert consultation for the Slovenian network of social responsibility, working under the Ekvilib institute, in regard to the preparation of tender documentation for the European CSR Award Scheme.

We have carried out a round table discussion under the Magdalena Festival in Maribor, on 15-17 May 2008, titled “CONTRIBUTIONS TO THE DEVELOPMENT OF SOCIAL RESPONSIBILITY IN ADVERTISING.”

The IRDO festival also bestowed the award for the most SR work at the festival for the first time. The winner was a music video titled “Svi u štrajk” (“Everybody strike!” by Dubioza kolektiv) (Author of the Idea: Mirza Čeho, Director of Photography: Aziz Čeho, Designer: Vedran Mujagic, TV/Film Director: Mirza Čeho, Year: 2008, Category: 4. Motion, Awards: Finalist IRDO Award).

The second time we bestowed the award at the Magdalena Festival in Maribor in May 2009, the winner was a calendar titled “Think Different 2009”, Creative Calendar (3D, 6.600×0), Author of the Idea: Bojan Galič, Support: Saša Djordevic.  Awards: Finalist IRDO Award).

We also continued with bestowing the awards in the following years, you can find more information at: www.magdalena.org.

In cooperation with the Kalidej association, an association for marketing communications (http://www.kalidej.net/) we participated in November 2007 at their Kalidays Festival and carried out the first call for an advertising text or banner on the topic of social responsibility. The topic of our call in 2007 was a project called DO-IT! The project was intended for the promotion of creativity of youngsters (high and higher schools students) in the sense of developing new proposals, ideas and projects for socially responsible activities.

The following two works were selected at the 2007 Kalidays Festival:

When Slovenia was presiding over the EU, the RS Ministry of work, family and social topics organised an international conference titled “Work for youngsters – well-being for all” and was attended by over 300 participants from various EU countries. In cooperation with the ministry, the IRDO organised an exhibition of works of creative youngsters on the topic of youth employment. The contest and the exhibition was prepared in cooperation with the association of marking communications students, Kalidej from Ljubljana. Seven selected works were presented in Brdo, Kranj. We also compiled the proceedings for the conference and coordinated its production. The proceedings were published in December 2008 with a print run of 200 copies. Link to the proceedings for this conference: http://www.mddsz.gov.si/fileadmin/mddsz.gov.si/pageuploads/dokumenti__pdf/delo_za_mlade_zbornik_www.pdf

Research activities – ZRC IRDO
The work of ZRC IRDO is focused mostly at interdisciplinary research of social responsibility and presenting the results of ZRC IRDO in Slovenia and abroad. The associates of the institute already started publishing contributions at various expert and scientific conferences in Slovenia and elsewhere in 2005. Prof. Emeritus DDr. Matjaž Mulej, Anita Hrast and other members of the IRDO institute regularly participate at scientific and technical conferences in Slovenia and abroad and other expert meetings. Our work is evident from the bibliography of our researchers. We have participated at numerous round tables, seminars, scientific and technical events, etc. The bibliographies of IRDO researchers can be found on www.sicris.si under the codes of individual researchers:

In 2009 we successfully ran for funds and received approval and contracts for two 3-year research projects:

We published the following under the framework of our research, e.g. in 2013:

8. Social responsibility – current challenges. Collection of proceedings of all eight conferences sponsored by IRDO Institute for development of social responsibility, Maribor, about 250 contributions; edited by Anita Hrast, Sabina Kojc and Matjaž Mulej. On average authors are from beyond ten countries. 2013 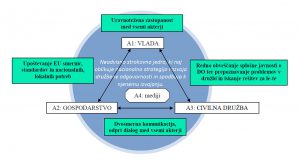 We strive to transmit actual and relevant information about social responsibility to the Slovenian public. That’s why we inform the media and the public about the work of the institute and its collaboration with our partners in regard to activities and projects dealing with social responsibility. We collaborate on several festivals, such as Magdalena Festival (2008, 2009, 2010, 2013) and Kalidays (2007, 2008).

We regularly report about our work to the media, members, partners and other organisations in the community.

Since 2008 we publish a magazine called IRDO Mozaik for our members, the first Slovenian socially responsible newspaper.

Cooperation on events of others:

The IRDO institute regularly publishes various literature in areas of social responsibility.
Each year we publish the following publications:

We welcome you to buy some of our books. Contact us for orders.

Free literature for members of the IRDO institute:

Participating in the publications of others